My Head. It Has Not Been Reattached.

Well, hello! Here I am. Headless.

Things haven’t really simmered down on the home front nor the Hair Thursday front. I returned Friday from Oklahoma, where Wito was cared for (read: spoiled rotten) while I was prancing around New York with TV makeup on.

I ask of you, television guest or high class hooker? 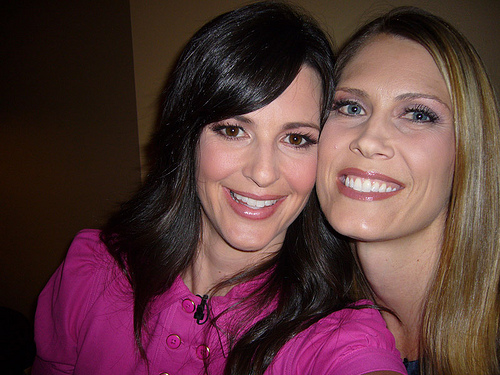 It’s a tough call, my friends. I’m sure the makeup was spot-on for the cameras, but the six business men who shared an elevator ride with me in my trench coat afterwards probably assumed the latter. You should have seen me walking into my hotel, just waiting for the manager to pull me aside, all Pretty Woman-style. (Excuse me, madam. Where do YOU think you’re going?)

Although, I’m happy to say I would have kept those false lashes on for the rest of my life if I had the chance. (Dear unbelievably awesome hair and makeup team, any chance I could get you to move to California? I make really good margaritas! Love, Whoorl.) As for the television appearance, I will let you know as soon as I get an air date so we can all laugh together at my rambling in front of a live studio audience.

Speaking of the television show, did I mention that the week before my trip to New York, field producers were sent to my house to film an at-home interview, as well as some additional footage of my day-to-day activities? One of those day-to-day activities was me bloggity blogging on my computer, and only in the middle of filming my hands typity-typing did I realize that my nails were possibly atrocious.

My living room was completely inundated with bright lights, microphones, people, cords, did I mention people? Yes, people staring at me while I talked about lord knows what. It was truly an surreal experience.

Fast forward to the present. Wito has had a fever of 102-103.5 for the past 36 hours. He’s a sick little dude, and I am taking him to the pediatrician in a couple of hours. My house is in its normal post-weekend state (DEMOLISHED) and guess who’s coming over in 5 hours?

(At least my nails are manicured this time around. Positive thinking RULES.)