Cupping for Sciatica and/or Lower Back Pain

Recently, my sister opened the coolest Pilates and circuit training studio called Beyond Studios here in Oklahoma City. Super exciting. So exciting, actually, that I got a little too eager and slightly overdid it for the first two weeks.

And let’s be honest, I think you’ll agree that this probably didn’t help the situation.

Turns out, an old hamstring injury of mine flared up big time, and I’ve been dealing with lower back and leg pain for a few weeks now. The range of motion from my hips down has been pretty pathetic, which has made working out and my usual yoga classes too challenging for me.

Currently, I’m seeing a chiropractor with a focus on soft tissue who has been very helpful in my recovery, although making me look like a human domino. 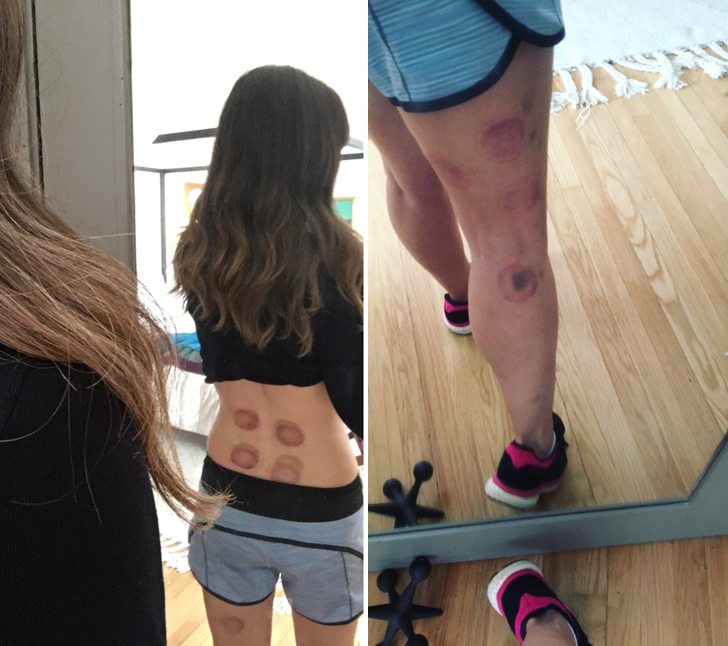 (Also, I appreciate the chiropractor placing the cup on my calf directly around that awesome bruise. So artful.)

True story, you guys. Last week, I couldn’t even bend forward at the slightest angle without shooting pain in my left leg and hamstring…literally leaning forward to wash my face was excruciating. (It’s also a good time for me to point out that I’ve never been able to bend over and touch my toes. I have some scar tissue/adhesions in my lower back muscle tissue that just will not allow me to get that range of motion.)

The chiropractor suggested cupping on my lower back to help with flexibility, so I went for it. 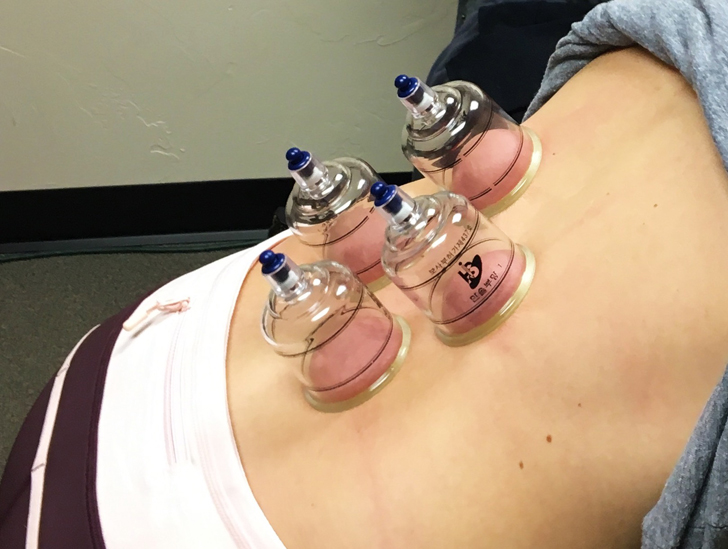 Yes, that is my back being sucked into some glass cups. Hey, Michael Phelps does it.

He put the four cups on my back, and let’s be honest, it’s not the most wonderful feeling. It feels like…well, the way your back would feel being SUCKED INTO A CUP. For me, despite the pulling feeling, it was a deeper ache, because the cupping was sucking on (and helping to break up) an old adhesion in my muscle tissue.

We began some stretching movements with the cups on – first I would bend over and try to touch my toes (nope! not even close!), then raise up and do a slight backbend, then side-to-side and repeat. You guys, by the fourth round of the stretches, I could touch the floor. NO JOKE. Never in my life have I touched my toes, and my fingers were on the ground in front of me with my legs completely straight. He took the cups off and I could stretch even deeper.

I was astonished. I walked out of the clinic with no pain in my body. My leg and hamstring felt completely fine. It was bizarre. I called at least 10 people freaking out. (And you know it takes a lot for me to actually speak to someone ON THE PHONE.)

Now, the next morning? The pain came back, but not as bad as before. And could I touch my toes again? No, but my range of motion was greatly improved.

I’m seeing the chiropractor once a week and feel better with every visit. I’m not sure about cupping in terms of toxin removal, but if you are interested in flexibility and increased range of motion from new or old injuries, I’m a believer.

As always, hit me up with any questions in the comments!