Thanks for all of the love, ladies. I’m telling you- your comments about my so-called young appearance could not come at a better time. I spent upwards of ten minutes this morning trying to brush a black “eyelash” off the corner of my eye, until I realized it was not an eyelash, but the deepest crow’s foot wrinkle in the history of the earth. Suckdom.

I love it when Hair Thursday participants do all of the work for me – especially after a rare night of martinis. Meet Veronique. 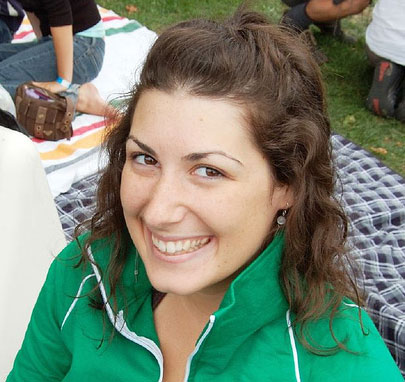 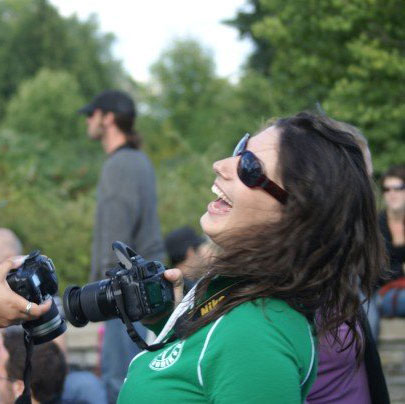 Veronique is a kick-ass photographer with a fun sense of style and apparently, doesn’t need my help because she sent the absolute BEST photo of a possible hairstyle for herself.

Oh, I know what you’re thinking. I’m just saying that so I can wuss out on the work of finding a suitable style for her, right? WRONG. I’m prepared to defend my choice! With the 59 million reasons WHY this hairstyle would look great on Veronique. 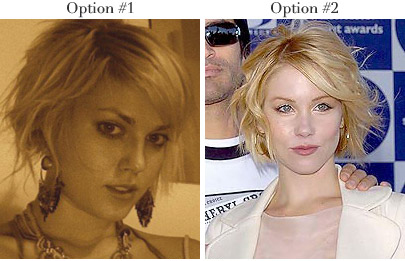 Option #1 is the photo Veronique sent to me and #2 is a slightly more traditional variation of the same cut. They both are highly-layered and highly texturized, but #1 has more of an inverted shape and much heavier bangs.

Veronique seems to have the kind of hair that wants to be “in between”. In between lengths, in between curly and straight, in between thick and thin. Instead of forcing her hair one way or the other, she needs to spotlight what she’s got. Both of these style options would be great because a mussed look is the goal. (No one uses the word “muss” anymore. BRING BACK THE MUSS!)

Notice how the heavier bangs in Option #1 are coming from the middle of the crown forward. This type of cut would help give Veronique a thicker look, masking the thinness in front and the cowlick in the middle of her forehead. As for the sides and back, she wouldn’t have to do a thing. Just wash, towel-dry, put a dab of waxy pomade through the ends and let air dry. The way Veronique’s hair naturally dries (the in between thing) would look almost exactly like the photos.

Plus! The shorter cut and bangs would totally bring out her lovely eyes.

Our second participant is Lane. She is the 2nd official inductee into The Fishing Club. 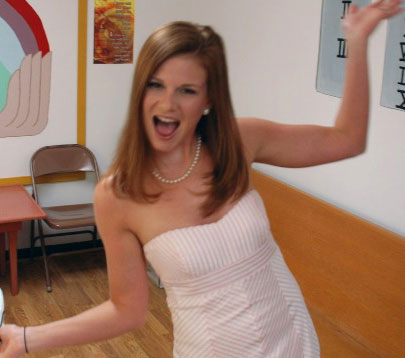 Oh, that’s too bad. I was going to tell Lane to shave it all off.

Oh, I kid. I totally know where she’s coming from with her hair boredom, but I do think she should leave it longer. However, she asked about the possibility of bangs for a new change. I think that could work- maybe starting out with longer ones at first to see if she is happy with the look, and then going shorter if she likes them. Maybe something like this.

p.s. – Totally unrelated to the participants at hand, but this is rocking my world right now. 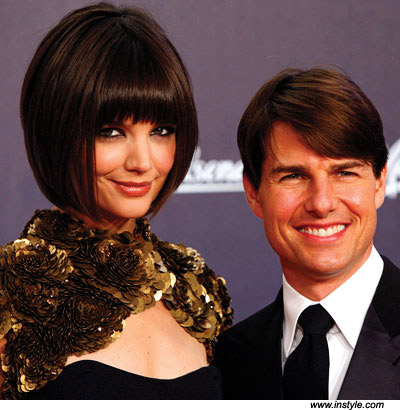