First of all, thanks for the comments regarding shower attire. Trust me ladies, I would give my right ass cheek to wear jeans and a cute top to my shower. However, this particular shower is being hosted by several of my mother’s friends. In fact, not only are the hosts my mother’s friends, the only guests attending are my mother’s friends (except for a few, including my sister and Gorillabuns, which by the way, THANK YOU FOR COMING. PLEASE DO NOT EXPERIENCE A FAMILY EMERGENCY CAUSING YOU TO NOT SHOW UP BECAUSE I NEED A FRIEND, AND YOU DON’T WANT TO MAKE A PREGNANT GIRL CRY. NO PRESSURE). Anyway, long story short, I love all of the hostesses and am so grateful for what will be a lovely shower, but I think they would possibly shit themselves and drop dead if I showed up in jeans. Call it a Southern thing, I don’t know. However, I did find a very cute non-maternity skirt from J. Crew to wear. Crisis averted.

Cupcakes. Quite possibly the best $3.25 cupcake in the world. This particular cupcake shop recently opened in Los Angeles, and another will open in Orange County this summer (attention OC manager: look out for the pregnant lady). I am hooked. Coincidentally, the owner of this darling place grew up in Oklahoma and is an acquaintance of mine from my middle school to college years.

Most of my interactions with the cupcake proprietor were limited to my eighth grade year when I dated (we were SO going together) his little brother, Dan*. My first REAL boyfriend, and yes, light petting may have been involved. I mainly remember him busting through Dan’s door, hog-tying his hands behind his back, throwing him in a sleeping bag and hanging him from the shower. Ah, such wonderful memories. I must admit that he was always very polite to me while beating the shit out of his little brother.

I never really saw the cupcake proprietor much after I had to break up with Dan when I started high school. You see, Dan was a grade younger than me and I had to move on with my life, evident in this excerpt from my eighth grade journal (which, of course, I’ve kept for comedic purposes).

I can’t believe I have to break up with Dan. I love him SO MUCH and WHY DOES LIFE HAVE TO BE SO HARD? He is my soul mate, but I have to move on to a new phase in my life. I guess times like these are what mold us as people, but I am so devastated. Will my heart ever stop hurting? I can’t stop listening to Careless Whisper.

My only other interaction with the cupcake proprietor was when he escorted me in a debutante ball during my college years and consequently stole my Frank Sinatra Greatest Hits CD. I do believe that calls for a free cupcake at some point, yes?

And, yes. YES PEOPLE, I was a debutante. A belle of the ball, you might say. Commence shuddering. Is the not-wearing-jeans-to-my-shower thing starting to make sense now?

On to my cupcake adventure last Saturday. After Caroline and I finished our shopping, we were literally drooling in her car on the way to Sprinkles. Such happy girls. We knew there would be a line, but 30-35 people waiting outside? Geez. But I was ready- what’s a little pregnancy-induced ankle swelling once in awhile? No problemo. As we were standing at the end of the line, I thought about all of you and decided to snap a quick pic of our situation for future blog purposes.

The time was passing by rather quickly, probably because we were picking apart all of the young LA actress-wanna-be’s standing around. Were they really going to eat the cupcakes? Would the aftermath include purge-attempts? My God, the FAKE fried blond hair. Really, do these girls ever take a mirror and look at the back of their hair? The orange roots! The straw-like texture! I’ll never understand. That got old after awhile, until I realized that Jimmy Kimmel and Sarah Silverman were standing a few people in front if us. See? I hadn’t noticed him before when I took the photo of the line. I’m so glad he didn’t see- I would have been mortified if he thought I was taking a picture of him. I think both Jimmy and Sarah are hilarious, but I’m not the type to snap photos.

Oh excuse me, I must have passed out on my laptop while typing this. This never-ending entry must have lulled me to sleep.

Oh yeah, the free cupcake. After many quick jaunts back and forth to the 20-minute loading zone parking meter, we finally made it to the front of the line before you actually enter. The shop has to keep the door closed for fire-code reasons, so you’re stuck, staring at a frosted glass door wondering what in the hell is going on in there. It’s all very too-cool-for-school, but the anticipation. The Anticipation of the Cupcake! My feet were aching, my back was hurting, but I knew my time had come.

All of the sudden, an older man with a thick accent walked up to me and in a totally wussy woe-is-me voice, asked me if I wouldn’t mind letting him cut.

ARE YOU FUCKING KIDDING ME?

At this point, I must tell you that things like this ALWAYS happen to me. The man could have asked anyone in that line, but he had to ask ME. Line-cutters must have an internal radar that specifically targets pushovers in public situations like this. I’m what you like to call a “public harmonizer”. I just want things to be copasetic; no dilemma, no drama, all smiles. So usually, I’ll agree just to appease the situation all together.

This geezer thought he had me pegged. That I was going to let him mosey on into the shop after standing in the line for well over 40 minutes. Not to mention all of the other people behind me who had been waiting patiently. No way. I looked at him and said, “I’m sorry, but if I let you cut in front of me, you would be cutting in front of the 50 people behind me, and if you are willing to ask all of them, I have no problem”. Way to suppress the public-harmonizing factor (patting my back). To which he replied, “I’m just so old, and standing in line really hurts” in this horrifically annoying whine.

I looked at him, pointed to my belly, and said “Sir, I’m pregnant, and trust me, standing in line for the past 45 minutes hasn’t been very comfortable for me either.” To which he replied, “Oh yes, you shouldn’t be standing for that long”. Which made NO sense considering he would have increased my waiting time by cutting in front of me. BUT HE WOULDN’T STOP! He pulled out a five-dollar bill and asked if I would at least buy him a cupcake. And then a completely non-public harmonizer thing came out of my mouth. I looked at him and said “Sure, but your buying mine too.” Hand over the cash, geezer.

He agreed, and handed me a twenty. Look at the perfectly perfect yumminess…all for free. 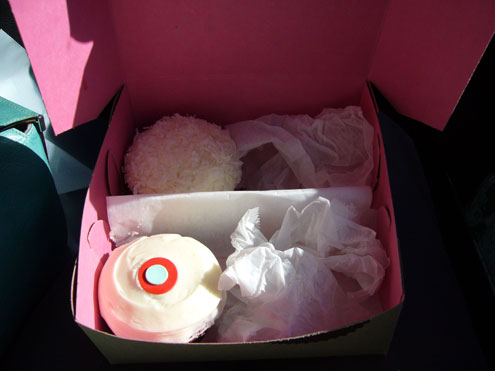 *name changed to protect the innocent of embarrasment