Two days before Whoorlita turned 3 months old, the local daily deal on Plum District was a month-long boot camp. I stared at the screen for all of 4 seconds before clicking the purchase button. I knew that if I allowed myself even a minute to stew over it, I would make 1,000 excuses as to why a boot camp would be all wrong for me. (New baby! Bad timing! Waking up at ungodly hours after an already sleepless night! Breastfeeding/pumping issues! The list goes on and on…)

It was too late now. The purchase had been made.

I really had no idea what to expect. After baby #1, I used the C25K program as my baby weight loss program, and it did the job. So why would I subject myself to an exercise program modeled after military conditioning? Had the postpartum hormones caused me to lose my mind? (Probably.)

I started boot camp (3x/week) in mid-October. Honestly, I felt like my lungs were going to implode on the first day. I was OUT O’ SHAPE. The day after was pretty brutal – in fact, I recall spending upwards of 10 minutes trying to walk down my stairs the next morning from muscle soreness. But guess what? I felt completely energized driving home from class (pretty impressive, considering the sun was just coming up), and I didn’t have my usual 2-3pm slump. By the end of week one, I felt pretty damn good. The end of week two? I was a convert. My energy levels were through the roof, and that was saying a lot for a mom of a newborn and a 4-year-old that NEVER STOPS MOVING AND/OR TALKING.

Some of you might be wondering exactly what a boot camp entails. Although every program is different, the gist is exercise through resistance and cardiovascular training. (Such as running short distances, push-ups, sprints, lunges, jumping jacks, jump rope, mat work, weight training, stability ball/medicine ball training, stretching, cone drills, and obstacle courses. Um, not all in the same session. I swear.) What I like best about boot camp is that my trainer completely switches up every class. I never know what she’s planning for us, which keeps it totally fresh. Keeping exercise interesting is a huge motivator for me, and is probably why videos like 30-Day Shred don’t work for me in the long run. I have videos practically memorized by the end of week 2, which bores me right back into indolence.

After completing my first month of boot camp, I had lost several pounds and several inches. My pre-pregnancy jeans that previously screamed for mercy upon reaching my thigh area were all the way up and buttoned. (Although, let’s be honest, not QUITE ready for public viewing.) Suddenly, all of those 4:50am breast pumping sessions in preparation for class (while the rest of my family slept soundly in the pitch dark) were beginning to pay off. I decided to sign up for another month, and after completing that session, I was within two pounds of my pre-pregnancy weight and wearing almost all of my pre-pregnancy clothing again. Two months, you guys. Two months! It was no cake walk, but so worth it.

The best part for me personally is that my body is morphing into a shape that I’ve never had before. (Even pre-babies!) When I was exclusively running after baby #1, I lost the weight, but I was just a smaller me, shape-wise. Now, all of the toning and weight training I’ve completed in boot camp has really changed the overall look and shape of my body. My muscles are leaner, and I actually don’t cringe when I look at my legs, which have ALWAYS been my least favorite body part. (I even busted out a mini-skirt recently, and that’s saying something.)

Before boot camp (this past August): 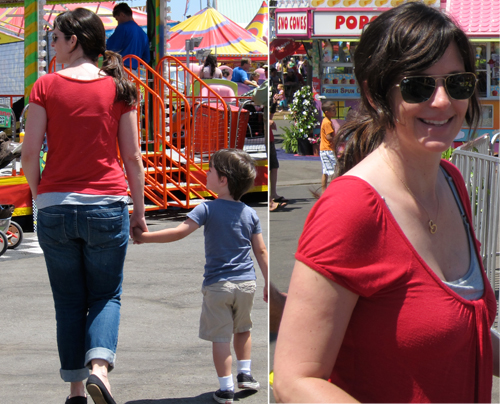 (Yes, that is cellulite on my upper arm. Oy.)

After completing 2 months of boot camp 3x/week (uh, as well as a 2-week holiday hiatus consisting of cookies, cake and pie…shhhhhhpleasedon’ttellmytrainer):

I still have a fair share of work ahead of me, but I couldn’t be happier about the progress I’ve made in the past two months. I love boot camp. Period. I started my third session this morning, and I couldn’t wait to get going after these past two weeks of food, beer, food, cocktails, and MORE FOOD.

If your New Year’s resolution is to drop some pounds and gain a ton of energy, definitely consider a boot camp. And if you are in the Orange County area, I can’t recommend Total Training by Tammy enough! (It’s really no wonder her program was voted Best Workout Program in Orange County by Citysearch. It is AWESOME. Tammy is Motivation, personified.)

Tammy is offering a free kick-off week (starting today, Jan 3, and going through Friday, Jan 7) of Boot Camp for the new year, so you have no reason not to try it out. Plus, she has 5 locations around the OC and several different times throughout the day that you can mix and match, so don’t be trying to make up excuses over there on your couch. DO IT. (And tell her I sent ya!) It might be the best thing you’ll do for yourself all year.