Several months ago, I received an email from Emily containing these photos. Emily explained that her hair was thick, wavy and she was itching to get rid of it. She was considering short hair and wanted to know if she could pull it off. 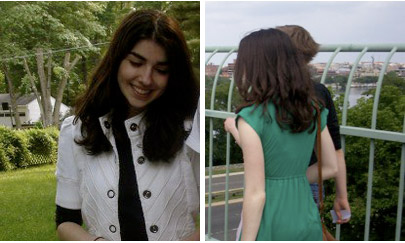 I put her on the list, and as her week approached, I sent an email asking if she needed to update her photo. She sent me this: 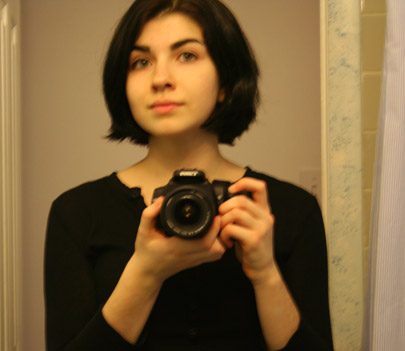 She emailed that she had since dyed her hair black and cut it herself. Her new bob wasn’t evenly cut and was prone to bedhead and unwanted flip.

First off, let me say that Emily has a beautiful face that could pull off any style. Her petite frame and large eyes remind me of Audrey Tatou. Looking at the initial photos, I agree that a short hairstyle would look great on her. It just seems that her lovely features are hidden by longer hair. Her updated photo is an improvement length-wise, but the color is too drastic.

First off, I would correct the color back to her natural medium/dark brown. The black is just too stark for her complexion. Secondly, PUT DOWN THE SCISSORS EMILY because the following options require a professional. 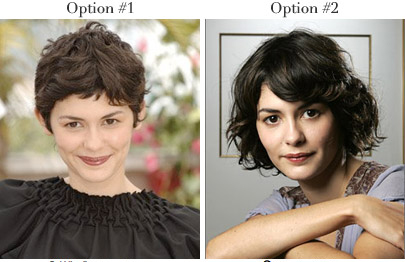 Both of these photos are of, you guessed it, Audrey Tatou. Good lord, I can’t express how much I love Option #1. It is such a darling cut, and would spotlight all of Emily’s beautiful features. Plus, there is virtually no styling that has to be done with this cut. Three to four minutes styling with her fingers and voilá! So. Cute.

That being said, if Emily doesn’t want to make the jump to a short hairstyle, Option #2 isn’t much shorter than her current length, but the addition of bangs would really accent Emily’s eyes and layers would intensify her natural wave.