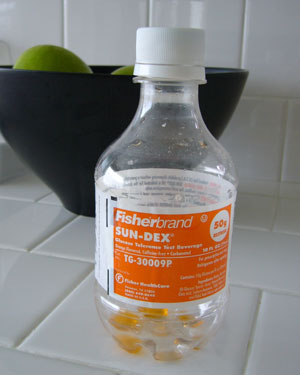 This morning I had my 27-week Glucose Tolerance Test to screen for gestational diabetes. In a nutshell, this test consists of drinking 10 ounces of a syrupy-sweet orange drink containing 50 grams of dextrose (helloooo sugar high) that tastes like Sunkist on steroids, sitting around for an hour and then drawing blood exactly an hour after you took your last sip of liquid cocaine. Apparently, timing is eveything with this test. If you don’t do it exactly an hour after the last sip, IT RUINS EVERYTHING. YOU HAVE TO START OVER AGAIN! FROM THE BEGINNING! NEW DAY! NEW DRINK!

Sweet Jebus, Dr. OB McDoctor. I get the point. No lolly gagging around when it comes to this test. Although, do you even know me? Do you know what you’ve done? You have now instilled the little seed of “you better not be late” in my already CBLOCD (Can’t-Be-Late-Obsessive-Compulsive-Disorder) head. It’s like offering just a little sip of champagne to the recovering alcoholic. Everyone has their “thing”- something that just sets them off. Well, mine is the fear of being late. Arriving even a minute late to any function or appointment really raises the good ol’ blood pressure. So naturally, I am the Queen of Arriving Early, even if it means sitting in my car at the destination for 10-15 minutes.

This is a routine test that every pregnant woman takes between 26 and 28 weeks. No biggie, really. Except you would have thought my baby was about to be transported to Jupiter for observational tests from the sleepless night* I had last night. I had the same nightmare over and over- that I drank the stuff at my home and when it was time to drive to the lab to get my blood drawn, I couldn’t find the keys OR the car wouldn’t start OR I couldn’t find the lab slip, causing me to miss the precious window of time and having to START OVER! FROM THE BEGINNING! NEW DAY! NEW DRINK! As you can see, this really wasn’t about the baby or even me having gestational diabetes. It was all about being late, of course. So, this morning before I even drank the stuff, I lined up my keys, the lab slip, my clothes, etc.

And then I drank the equivalent of 789 jellybeans.

Now, some people don’t even notice a difference when drinking this stuff. However, when a person described as “naturally-caffeinated” by her doctor drinks Glucola, get the fuck out of the way. I, of course, showed up 20 minutes early to the lab like a CBLOCD ticking time bomb. For 19 minutes and 59 seconds, I looked at my watch, looked at their purple Prilosec wall clock, looked at my watch, looked at the Prilosec wall clock, so on and so forth. Is this what cocaine feels like? And when the time came, don’t think I wasn’t at the sliding glass window, announcing that my window of time had arrived, and I really don’t want to have to START OVER! FROM THE BEGINNING! NEW DAY! NEW DRINK!

The test was performed right on time. I am now coming down from my glucose high and realizing that if I fail the blood tests, I will have to endure a 4-HOUR glucose screening. Dear God, help us all.

* or it could have been last night’s episode of Grey’s Anatomy. Note to self: watching a show that involves a young pregnant woman dying during surgery while the baby is saved by an emergency C-section will cause long periods of hysterical sobbing and lots of snot.