Wita is 9 months old, y’all. 9 months! According to my highly scientific calculations (counting on my fingers), this means she will be one year old in less than three months. SHUT THE FRONT DOOR.

Wita, Wita, Wita. This girl is a mystery, I tell ya. Such the opposite of Wito, in so many ways.

Since day one, Wito has worn his heart on his sleeve. (Very animatedly, I might add.) He’s Just! So! Excited! About! LIFE! Jumping around, flapping his arms with wild abandon, introducing himself to every stranger we pass on the street. He tells me everything he’s thinking and feeling, he craves appreciation and acceptance, and can put on one hell of a show.

He was that baby who basked in the coos and “oohs and ahhs” from strangers at the grocery store. When people would smile and engage with him, he would totally light up. He would tilt his head to the side, give them a precious baby smile and it was showtime. Every time. “Give ’em what they want!,” must have been his personal mantra.

Wita, on the other hand, could not be more different. She’s my little poker face. Also a content baby, but not nearly the open book that her brother is. Dear random strangers in public places, don’t waste your goofy faces. Last week, while we were in line at Costco, several people behind us starting doing the whole goo goo gaa gaa, silly smile thing at her. Her response? A stone-faced stare with a raised eyebrow to boot. After about 5 minutes, we were all laughing hysterically (except for her, of course) because NO ONE could break her! How it’s possible that a 9-month-old can make an adult feel like a total asshole, I will never understand. But this girl can do it.

However, three major things have started to happen around the 9-month marker. Sitting up (finally), pseudo crawling and ah, screaming.

As of this week, Wita could not sit up unassisted. Period. We’re talking maybe 5 seconds on a good day. I wasn’t too concerned at her 6-month well check, since it was an emerging skill for most babies, but then the 7-month mark passed. And the 8-month mark passed, AND at 9 months, we still weren’t any closer to sitting. We couldn’t even place her in a highchair at restaurants because she would just slither to the side like a rag doll. So, I wasn’t too surprised when our pediatrician recommended that we start physical therapy with her earlier this week, since things weren’t progressing at all.

I drove Wita home, put her down on the loft rug, called the physical therapist to set up and appointment, walked out and saw this. 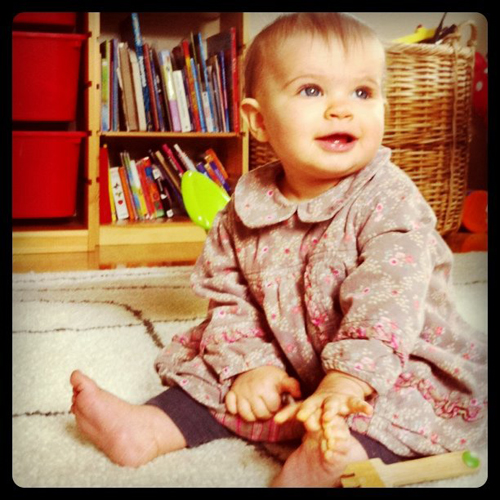 Yep. Sitting up on her own. And has been sitting up unassisted all week for 30+ minutes at a time since. This girl, I swear!

Otherwise, there’s been a lot of scooting, screaming, and gumming every object known to man over here.

It’s so interesting watching both of these kids’ personalities develop over time. What about your kids? Do they have totally different personalities or are they totally cut from the same cloth?