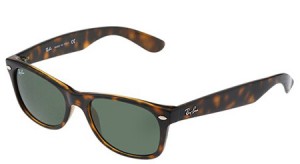 I’m not in the market for a new pair of sunglasses, I swear. It’s just that I arrived 30 minutes early (SHOCKER) for my eye appointment yesterday afternoon and was forced to try on frames. Forced, I say!

The original Wayfarers don’t look so great on me, but the ‘new’ style was super fun. Look, I even took an incognito burrito photo as evidence! Now, I shall stare at that photo with enormous longing until April 10th.