I’m not much of a daytime TV gal, so I’d be embellishing if I told you that I watched Oprah regularly. I don’t. However, I admire her endlessly.

Last year, right around the time the Babies movie was released, I saw that Oprah was doing a segment about the movie on her show. I set my DVR to record the episode because I was dying to see those adorable babies in action. That evening, when I had some time to watch, I noticed that the majority of the episode was an interview with Simon Cowell about his departure from American Idol. I figured, what the hell, maybe I can learn something new from Mr. Cowell. (Possibly why he continually chooses to wear those ridiculously tight tees?)

Ohhhh, am I glad I watched it. Oprah said something during that interview that resonated with me to the core.

“Do you believe in luck? I don’t. Because I think there is no luck without preparation meeting the moment of opportunity.”

The truest words ever spoken, in my opinion. And look. I STILL have that episode from over a year ago saved on my DVR. 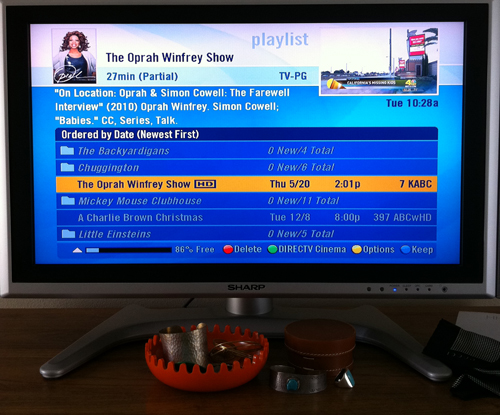 (Yeah, someone else OBVIOUSLY has control of our DVR choices…)

I’ve listened to those words many, many times over the course of the last year.

So. What have I learned from Oprah? 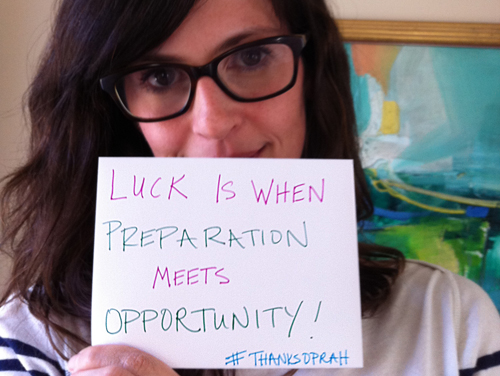 In honor of the last week of the Oprah Show, Maggie put together a #thanksoprah Flickr group to celebrate the things we’ve learned from Oprah over the years.

If you want to play along, take a photo of yourself holding a sign with something you’ve learned from the Oprah Winfrey Show. And then: