Picture this. A chilly day spent on my grandmother’s ranch in Oklahoma. After a fairly uneventful drive from Oklahoma City, we arrive with gifts in tow. Why, here we are, relaxing on (read: breaking) my grandma’s Lazy Boy. 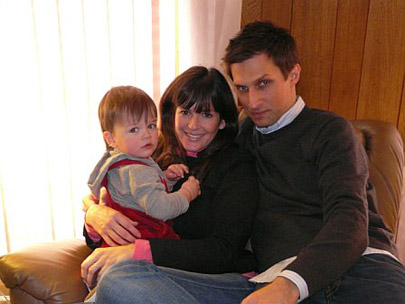 Christmas at my grandmother’s home is a very relaxed affair. A down home meal, homemade pies, sweetened tea and some football. Usually, I end up sitting on the above chair for most of the 5-hour visit.

Except for this particular day- I heard my father and grandmother talking about some fantastic, life-altering ham and how he just HAD to have one to take back to the city. Some shuffling and jingling of keys ensued, and before I knew it, my dad was heading out the door.

Normally, this wouldn’t have phased me- I mean, it takes a lot to get my ass out of that fine leather chair, but for some reason, I found myself yelling, “Dad! I wanna go! Hold up!” He inquired incredulously, “You want to go pick up a HAM with me?”

Thus began our adventure to secure The Miracle Ham. Through two small towns and a very desolate 2-lane highway, the entire time listening to my father boast about a damn ham. “It isn’t injected with ANYTHING! Such smoky flavor! Hung to dry! Natural! The best flavor you’ve ever tasted!”

Luckily, I had his new iPhone to play with, thus counterbalancing the ham sermon. However, I was very careful to interject a well-placed “uh-huh…you don’t say…mmm, smoky” along the way.

I guess, in my mind, I assumed we were heading to a retail operation, such as a Honeybaked Ham store (although, YOU HAVE NOTHING ON THE MIRACLE HAM, FOOLS!) Little did I know that we were going to spend some quality time here: 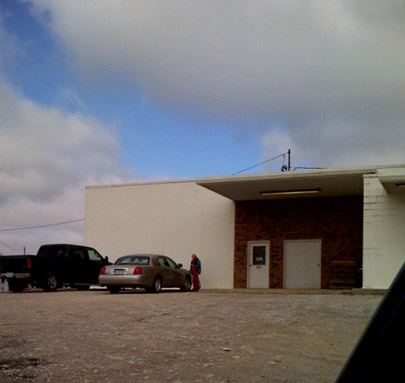 The iPhone came in quite handy, you see.

I looked at my father and asked, “Is this, like, a meat production plant-type establishment?”

To which he replied, “I do reckon, little lady, now git over yonder!”

(My extremely suave and well-spoken father hasn’t lived in a small town since 1967, yet transforms into Smiley Burnette within a 20-mile radius of his old stomping grounds.)

We walked up to the door, me skittishly standing in my father’s new-found cowboy shadow, and what I saw next was marvelous.

A smoky office about the size of an elevator with what looked to be a 113-year-old woman sitting at a desk, smoking some Kool Menthols. Across the cluttered desk sat her grandson and great-grandkids, looking at us as if we were just transported from Mars.

Keep in mind, the Miracle Ham Establishment isn’t even located in a town. It is in the middle of nowhere, and I’m guessing the owner/operators of the MHE do not have daily run-ins with people donning winter white peacoats and iPhones. It was a little awkward on my part.

However, Smiley was having a ball.

“Well, HOWDY, Miss Jones! It’s me, Ronny! Arlene’s boy! How ya doing? I was hopin’ I could buy one of those deeelicious hams of yours. I’m fixin’ to head out to the big city, and I sure would like a taste!”

*insert overdramatic eye-rolling on my part*

However, my eye-rolling was cut short when I noticed the young great-grandson (10 years old, tops!) eyeing me like I was a juicy ham myself. People, he licked his lips and with great (and unnecessary) fervor.

Let’s see – Smiley Burnette in one corner, Kool Menthol Elder and 10-Year-Old Pervert in the other. Things couldn’t get much more uncomfortable when, all of the sudden, the front door busted open. As I peered through the thick smoke, I saw the silhouette of a Very Large Man yelling, “Give me my hooves! I need my hooves!”

Kool Menthol Elder – “Well, why on earth would you need some hooves?”

Very Large Man – “Because I’m building my GUN RACK! DO YA RECKON?”

At this point, I was trying to silently delineate if pigs even had hooves, and if not, what kind of hooves did he mean? More importantly, WHY WAS I IN THIS SITUATION IN THE FIRST PLACE.

I quickly decided I was going to turn around and face the wall. Sure, it might look strange, but trust me, it was my best option.

I turned around, expecting a wall, when I realized it was a glass window. A glass window looking into the meat production “area”. Holy hell. May I just use a few words?

I’ll let you take that for what it’s worth. I looked at my father and mouthed, “Halp.”

Thank God, at this point, a lovely lady (wearing the world’s bloodiest apron and a poorly-bandaged thumb) appeared with our Miracle Ham. Fantastic.

We said our goodbyes and made our way back to car, feeling much dirtier than before we left. (Well, at least on my part. Smiley was singing about billy goats or something.)

We returned to my grandmother’s house just in time for the big meal. And you know what? I ate two slices of The Miracle Ham.

Now, I’m not really a ham person, but that Miracle Ham? It was damn good.