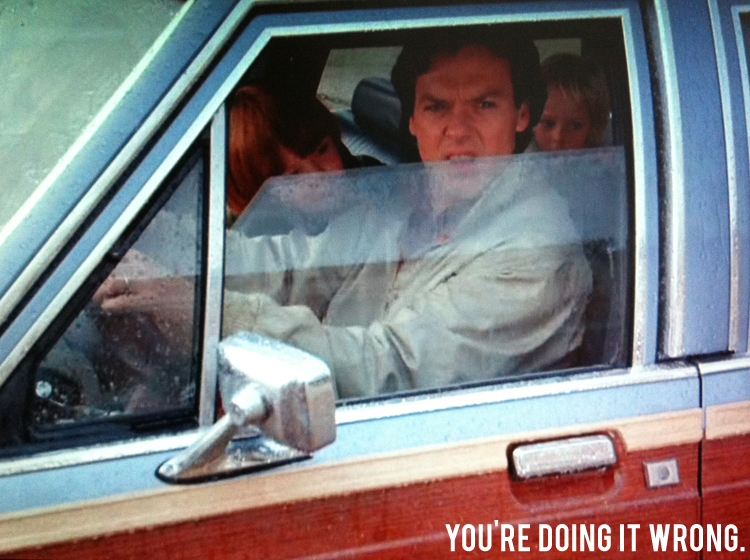 I recently had a full-on Mr. Mom moment at Wito’s school. The honking, the traffic flow volunteer flashing me the “roll down your window while I admonish your blatant disregard for the drop-off procedure” sign (if you are wondering- it’s moving the right arm in a cranking motion with a side of evil eye), the whole kit and kaboodle. How could this have happened? TO ME, of all people?! What kind of person actually reads the 59-page PTA manual on the first week of school? I do, dammit! I am that person. I studied the traffic flow map LIKE A BOSS.

When Wito was in kindergarten, the rule was to park and walk your child to and from the classroom, and when first grade started a few weeks ago, I continued to do the same. It’s a large K-8 campus, which can seem a little daunting at times. Plus, Wito still gladly holds my hand as we meander through the much older children. “He’s still my little boy,” I think to myself as we make our way to the classroom. I need to relish these fleeting moments.

Last week, as we were driving home from pick up, he told me he was ready to be dropped off in the mornings. His reasoning was thoughtful – he was older now, most of the kids in his class were being dropped off, and it would be easier than finding a parking place and walking – I had to agree. So for the next few days, I let him lead me to his classroom without any assistance. He was good as gold.

While packing up the car one morning, I confirmed that he was ready for drop off. We talked about the importance of walking directly to his classroom to keep from being tardy. He was on board. We drove to school, I got into the drop off line for the first time, and although I was in the correct lane, I made the mistake of stopping too early and letting him get out at the wrong curb area. THE TRAVESTY. Mothering license revoked! Wito tried to get out quickly, but his backpack got stuck on the door, which then prompted a blinged-out Escalade directly behind us to lay on the horn. (Thanks for that, by the way. Very kind.) Wito got a little frazzled, I was a little frazzled myself, but he got out as quickly as possible and I continued to pull forward until receiving my dose of corporal punishment from the traffic volunteer. I craned my neck to see if he was headed in the right direction, but I just saw him yelling “BYYYYYE, MOM!” and running towards the entry. Every bone in my body wanted to stop to make sure he made it into the campus, but the ginormous SUV was riding my bumper like a monster truck, so I just said a little prayer that he made it to his class on time. Which, of course, he did.

Upon returning home, I told D about our little Michael Keaton moment, and instead of giggling like I expected, I started sobbing. He looked at me completely puzzled, and asked, “Why are you crying?” In that moment, I realized my tears had nothing to do with embarrassing carpool mistakes or honking horns or eye-rolling. Oh no, those tears came from a much deeper place. As much as I try to hold on, my baby boy isn’t a baby anymore. With every little milestone that passes, my children are growing up, and it breaks my heart a little bit. I want to hold Wito’s hand forever – to feel his little fingers squeeze mine and never ever let that memory fade.

When I returned to pick him up from school, instead of walking up to his classroom, I hung back a bit and let him find his way to me through the influx of parents and kids and siblings and backpacks. When he appeared donning a huge smile, I asked him how his day was. He grabbed my hand tightly, and said, “It was a good one, mom.”

A good one, indeed.