After a couple of hours, we packed up and head back to our homes since both babies were hungry and/or tired. I pushed Wito up the hill from hell and as I got to the top, I noticed something. My ring was not on my finger. My stomach instantly dropped 1,000 feet.

I mentally retraced my steps, hoping I would remember taking it off at my house before walking down to the beach. But no, I had the ring on my finger when I arrived. I instantly tore apart the stroller, looking through every blanket, bag and compartment, but it was gone. And the tears started to flow because I knew it was somewhere buried in the sand (SAND! DAMN YOU, SAND!) on our big beach.

And it was my ring. My RING. Forget the fact that it was such a beautiful band from my favorite place, it was the band that D gave me when I had Wito. It was the band that, after a particularly rough delivery and a frightening week in the NICU, D slid into my palm while I was preparing for a nap after returning home with our beautiful little boy. It was the band that meant more to me than anyone could imagine. Gone. In the sand.

How could I have been so stupid? So distracted? I never wear jewelry to the beach!

I immediately called Brenda. She told me she would meet me back at our spot and would help look for it. She walked back down to the beach with a hungry baby in tow, just to help me out. What a friend!

And so we looked and looked, on our hands and knees, fingers raking the sand for this tiny and delicate ring. Several strangers offered to help and we formed our own little search party, but time passed and we had nothing to show for it. I thanked everyone for their help, but realized without a metal detector, we had no hope. With so many people walking around the area, it most likely had become buried deeper. Poor Wito was so starving and tired. I wanted to stay at the beach and stake my ground, but I didn’t have any food for him. I had no choice but to go home. Everyone dispersed, Brenda reluctantly headed home and I started to walk back to my house. With no ring.

I wonder what people thought as they passed by me on the sidewalk. I couldn’t stop sobbing. I was so angry at myself for taking the ring off to put on Wito’s sunblock. So angry for becoming completely distracted and forgetting about the ring on the blanket. So angry for vigorously shaking and flipping the blanket out in the breeze before leaving, which most likely sent the ring flying through the air. So angry and sad.

I called D and he was very gentle, which was very reassuring. He told me not to give up yet, but if it was inevitable that the ring wasn’t going to be found, it was at least insured. That made me feel the tiniest bit of relief, but I didn’t want a new ring, I wanted my ring.

When I arrived home, my parents (who I called from the beach) had found some info about a metal-detecting service in my area. I called, but it was an answering machine, and I felt like time was ticking, so I made the executive decision to buy a metal detector. After some quick internet searches and phone calls by D at his office, we found a place with some reasonably-priced ones. I fed Wito and off we went. Sure, it was totally possible that I would buy the detector, still not find the ring, and be out more money, but it was a risk I was willing to take. This gal’s not the type to sit around, YO.

I bought an el cheapo detector and head to the beach. When I arrived, all of the people from earlier in the day were gone and a whole new crop was scattered about. Thank goodness the seaweed we placed around the area was still intact. I started to pace up and down, mentally mapping out a grid, when a lifeguard in a truck approached. He told me he had a better-quality detector if I wanted to borrow it, disappeared in his truck, and several minutes later returned with Metal Detector 2.0 and a shovel. Now, where was this dude earlier in the day? No worries, I was so glad to have his super-duper detector. Thanks, Arnie!

And thus began the search. Just me, Wito (strapped in the stroller) and Detector 2.0. Oh yeah, and about 20 people staring at me, keenly interested in my treasure-seeking activities. Back and forth, side to side, nothing. Some scrap metal, an old dime, a bunch of crap.

I found myself thinking about our insurance deductible when I heard a beep. I bent down and brushed my hand through the sand, but felt nothing. I realized I wasn’t in a likely place and started to move on, but the damn thing kept beeping. So I got on my knees and repeatedly hovered the space with the detector. I started digging like a crazed dog, moving the sand out of the way, and then I felt something. Something hollow, something delicate, pulled it out and it was my ring!! My RING!! How it got so deep, I’ll never know!

I couldn’t contain my excitement! I stood up and danced around, smiling and jumping and generally looking like a total ass. But I didn’t care! And the best part? All of the people around started clapping and cheering for me. Some wrinkly man in his eighties yelled out “I thought for sure it would be a penny! I’m so happy for you!”. It was truly the best feeling ever. I will never EVER lose this baby again! 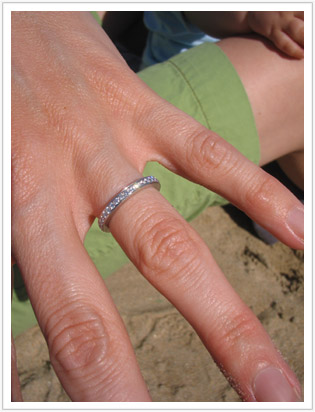 Coming soon – Part 3! Which is nothing but tons of happy beach photos from when Brenda arrived to celebrate my ring’s return.