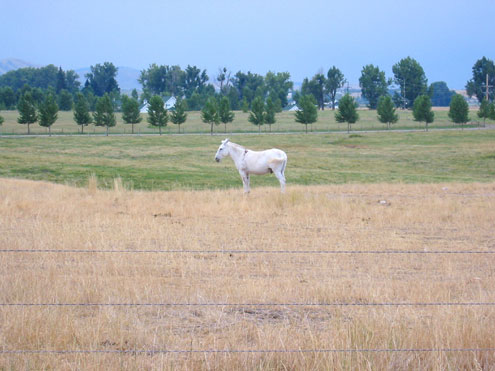 We’re back! We had a great time in Montana- it is truly beautiful and trust me, we have evidence (photos galore). We spent time exploring small mining towns, witnessing the Big Hole National Battlefield, and ascending 5,000 feet driving up unpaved roads to tops of mountains only to find some of the most beautiful waterfalls I’ve ever seen. It’s amazing there is still so much raw land in the Northwest.

However, the award for most memorable moment goes to our Thursday night outing to the Ponderosa Saloon in Hamilton, Montana for Karaoke Night. Gorillabuns would be so proud. Earlier in the week, while running errands, my sister and I noticed a sign hanging outside of what seemed to be a casino or bar advertising Karaoke on Thursday, Friday and Saturday nights. It took us all of 2 seconds to decide that we were in like Flynn. I guess Rockstar: INXS is really getting to me these days.

My sister and I have been known to dabble in what we like to call “Performance Art”. Performance Art includes choreographing bizarre dances, singing, lip-syncing, air guitar and drumming – basically anything to get a laugh. Actually, we’re completely satisfied with laughs, looks of disgust, fainting or generalized shock. Now, since I have entered my thirties, my performance art has diminished greatly. Sad, but true. I reserve the art for close friends and family, and considering my partner-in-crime lives halfway across the country, the opportunities are few and far between. My friends, opportunity came a knockin’ at the Ponderosa Saloon.

Around 9pm Thursday evening, after some cocktails and dinner the six of us (mom, dad, sister, brother-in-law, D and me) set out for the saloon. Feeling good and ready to wail. I had envisioned the Ponderosa (or the Pondy, as the locals call it) to be dark and smoky, with less than ten patrons sitting at the bar, most of them over 70 and very weathered. I was very excited about this because my sister and I could make our family laugh all night long without too many blows to our ego. Considering Hamilton has a population of 4,059 people and what seems to be 4,000 casinos, I couldn’t imagine that this little place would be busy on a Thursday night. Oh, was I wrong.

We walked into a full house, and the patrons weren’t geriatric farmers like I had hoped. Nope, mostly twenty and thirty-somethings, and might I say very big. Turns out the Hamilton volunteer firefighters were there, and those boys are enormous! Damn, they must eat a lot of beef. So, you know in the movies, when someone walks into a bar and everything becomes dead silent? That’s pretty much how we felt- city folk in a country bar. We ordered up some domestic bottles, grabbed a couple of bar stools, and tried to look as inconspicuous as possible. I looked at my sister and mouthed “No fucking way”. She agreed. This was the look on our faces during our first hour at the Pondy. We resigned ourselves to drink and play video poker for the rest of the night. Then, people started to sing. Lots of people. And guess what, they all SUCKED! I’m in no way the karaoke entertainer of the year, but I at least try to have a good time. These people were totally and utterly serious, like they thought maybe some record label executive just HAPPENED to be at the Pondy in Hamilton, Montana and this was their one and only chance at stardom. Most were singing slow country ballads and were either completely off-key or had mousy little voices that you couldn’t hear at all.

This turn of events coupled with multiple beers suddenly put us in a very different mindset. Now, it was on. We decided to warm up the crowd with a little “Love Shack”, by the B-52’s. We enlisted a man who had just finished singing “Ain’t Talking Bout Love” by Van Halen to sing the male part. We liked Jeff because he was the only person that sang an upbeat song and actually cracked a smile while performing. We later found out that he was previously a roadie and back-up drummer for Tesla. Do you remember Tesla? Only in Montana – I nearly pissed my pants laughing. Jeff was a great guy and is in one of the photos, and by the way, he was the smallest man in the bar (well, except for my father and husband- sorry honey). We finished the song, the crowd cheered, and we officially entered the we-are-the-best-fucking-karaoke-singers
-in-the-world mode. We high-fived some of the patrons on the way back to our bar stools, where we devised our next performance. There was no question; it had to be “Pour Some Sugar On Me” by Def Leppard. My father was not too thrilled with this choice, but we just ordered him another rum and coke and pretended we couldn’t hear him. We slugged another beer and waited for the DJ to call our names.

Finally, we heard our names and approached the stage. The music started- I grabbed the microphone and yelled at the top of my lungs, “Hamilton, Montana! Are you ready to ROOOOOOOOOCK?!” We got the deer in the headlights look for about 20 seconds, but they were on their feet in no time. The crowd danced and sang along to all the words- it was hilarious. Well, it was hilarious until my sister yelled “GOODNIGHT! SPANK SOME ASS!” at the end of the song, and our father and husbands yanked us out of the bar by our ears. We were totally oblivious as to why our family was so quick to get us out of the bar, until they later told us that my dad got bulldozed by some chick who was dragging her husband out the door screaming, “WHAT PART OF ‘WE’RE FUCKING LEAVING’ DO YOU NOT UNDERSTAND, ASSHOLE?!”. Turns out this guy was getting a little too excited by our vocal stylings, and his little lady wasn’t having any of it. Thus, our time at the Pondy came to an abrupt end, but we will always have a little place in our hearts for the Ponderosa Saloon. Oh, and Tesla too.