Wow, I can’t believe it is already Monday again. This year seems to be flying by at warp speed. Like they say, the older you get, the faster time flies. Whoah! Slow down, Puh-lease! This Saturday, my fabulous friends from the City of Angels came down to the beach to spend a glorious afternoon by the ocean. It was such fun- mainly because I was in the company of the cutest 4-month old known to man, aaaand it was his first time to the beach!

I guess most babies aren’t supposed to wear heavy-duty sunscreen until they are 6 months (huh?), so his parents bought him a little baby wetsuit and sunglasses. We sat out on a blanket on the sand and dressed this little cutie in his new gear. Once he was fully beach-ready, we noticed he looked familiar. Who could this kid look like? He’s 16 weeks for goodness sake. And then it hit us. This darling child had been transformed into baby Evil Knievel! Take a look for yourself! 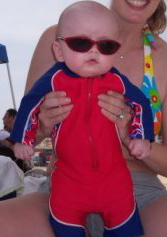 How darling is he? I just love him so!

Must run- I’m off to take a walk with Secret Agent Josephine. Talk soon!

I don’t watch a lot of television. When it’s on, it’s usually something sports-related. Football is my passion (fantasy football draft is less than a month away hell yesssssss), but let’s save that for another date and time. Lately, I have come across a show called Rockstar: INXS. Has anyone seen this show? How could you not- it’s on THREE times a week. I’m freakin’ hooked.

Simply put, I adore rockers. I’m not sure what Dave Navarro’s job on the show is, but I love him- even though he wears way too much makeup, over-plucks his eyebrows and generally looks like a transvestite. If you haven’t been sucked into this teeny black hole of deliciousness, here’s the premise. Lots of rocker chicks and dudes perform every week hoping to eventually win and become the lead singer of INXS. Man, what has happened to INXS? Sellout city, but hey I’m watching this shit so what gives. All of these tattooed, leather-clad rockstar-wannabees belt it out while flashing that rocker hand signal. You know the one.

Call me crazy, but growing up that hand signal meant one thing and one thing only- ‘Go Texas Longhorns’. Stop. The hatred I feel for the Texas football program. I grew up in Oklahoma and I am a die-hard Sooner fan. Sooners and Longhorns don’t mix. So, the hand signal throws me off a bit. By the way, the Sooner nation will whip some Longhorn tush for the 6th consecutive year in 2005. I digress.

I just realized last night for the very first time in my thirty years of living that INXS alludes to “In Excess”. Oh. My. God. I thought it was some crazy Australian acronym. How could this be? I was their biggest fan! I owned every CD (actually, cassette tape). I would rock out in my room with my sweet metal orthodontia and Hawaiian-print jams belting out “Donnnnnnnnt Chaaaaaaaaange”, and then proceed to french kiss my pillow (aka Michael Hutchence). Or maybe my pillow was Nick Rhodes from Duran Duran.

Let’s proceed to the heart of the matter. Everlong. Quite possibly one of the greatest rock songs of the 20th century. The intense love I have for Dave Grohl and the Foo Fighters is impalpable. That song is soooo good- can’t ya just hear it?

I can be anywhere- sitting on the couch, grocery shopping, standing in an uncomfortably crowded elevator- and if that song is looping in my head, don’t think I won’t bust that wicked air drum solo on some unsuspecting peeps. Well, it turns out that one of the rockers on the show had to perform that song live. He did pretty horrible- yes, it is a hard song to sing, but his excuse was that he had never HEARD that song before. Hmmmm. Now, if Perry Como and Bobby Darin get your musical juices flowing, I could fathom not knowing that song, but excuse me? Aren’t you supposed to be a rocker, Mr. Tattoo McMohawk?! Even INXS and Dave Navarro were clearly annoyed. Damn him for disrespecting my sweet Foo.

Clearly, I have invested a tad too much emotion into this issue.

Okay, I’ll let you in on a little secret. I have been putting this off for quite some time. My amazing and talented husband took time out of his career craziness to build a website for me because I CAN’T POSSIBLY FUNCTION WITHOUT A BLOG! I mean, the thoughts! In my head! Must publish them to the Internet community!

So here’s the deal. My husband busted his ass to crank out a “platform” for my incessant babbling, and I sit here procrastinating. Procrastination. I have a tiny problem with that, but LOOK AT ME! Writing my first entry! This is a big step, compadres!

First and foremost, I must bring something to your attention. I really hate writing in that grammar school/outlining/noun/verbish way. Essays suck. If you choose to read my blog- which really, I understand if you would rather stick your head in an oven- you might notice that I tend to use a lot of dashes, dotdotdots, and incomplete sentences. Embrace it, my friends. Not that this is a problem with my 5 devoted readers, but hey, that 6th person just might pop out of the woodwork someday. And they might have an issue, but guess what? I can just send their ass back to reference the August 3, 2005 entry. Don’t mess with me, peeps.

Secondly, what’s up with whoorl you ask? Well, it’s whirl misspelled, and I find that the definition pretty much sums up my thought process.