Should I feel guilty that I didn’t send out holiday cards this year? I feel kind of guilty…

Holidays in Southern California suck. I can’t get into the mood! Freaking ocean breezes, sunny skies and palm trees everywhere I look. I’m not trying to complain- I love our weather 11 months out of the year. It’s still in the upper 60’s/lower 70’s and sunny everyday. I’m just trying to find a solution for my lack of holiday cheer.

This is my second Christmas in California- last year, I don’t think I even noticed because I was still consumed with the after-effects of my wedding. This year, I’m bored. So I sit at my computer and read blogs about first snows and hot chocolate. Bullshit! People get to wear their darling cashmere and wool turtlenecks while mine gather dust in a storage bin on top of my closet. I have cute sweaters, people! I want to wear them! The travesty.

To make matters worse, I’m allergic to Christmas trees. D wants to get a Ficus Lyrata and decorate it with lights. Huh? I want to SMELL my Christmas tree…that’s the whole point, and I don’t know what in the hell a ficus plant smells like. Here’s a mock-up…does this look Christmasy to you? 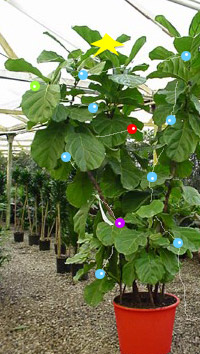 Thankfully, I found a 24-hour holiday music radio station yesterday. It’s a good thing…I spend all day driving around (with the A/C on, of course) singing at the top of my lungs. Yesterday, I did a lovely rendition of The Little Drummer Boy. ParRUMPADUMDUM, RUMPADUMDUM, RUMPADUMDUMMMMMMMMMMMMMM. But have you heard all of the new Christmas music out there? I’m not a fan. Give me Frank Sinatra, Bing Crosby or Johnny Mathis anyday over those poptarts. Jessica Simpson singing “Santa Baby”? Please SHUT UP, you stupid whorebag. Maybe you should spend more time trying to save your marriage and less time butchering Christmas classics.

Earlier this week, a helicopter was flying over my neighborhood with some dude yelling “Merry Christmas! HO, HO,HO!” through a bullhorn. What’s up with that? Were they trying to spread Christmas cheer? Quite frankly, it scared the shit out of me. I thought we were being invaded by terrorists and took cover under my desk. Bah humbug.

There is a light at the end of the tunnel, though. Two weeks from today I will be visiting my family where it is cold and (fingers-crossed) snowy. Hot chocolate! Turtlenecks! Rosy cheeks! I can’t wait. And I’m sure after spending 24 hours there, I will be whining that it’s too cold and I want to go back to California.

Ahhh, the joys of Christmas.

I never see movies anymore. Ever. And I adore movies, but D has some sort of movie-related narcolepsy that strips away any chances of seeing a movie in the theater, much less renting. In the four years we have been together, we have seen TWO movies in the theater. The Royal Tenenbaums (because I begged) and The Squid and the Whale (he was forced to go over Thanksgiving by this fantastic family). He dozed off during both, and let me tell you, it is in NO WAY fun or exciting to watch a movie with someone who has gone limp in the chair next to you. Plus, I end up not enjoying the movie due to constantly checking D out of the corner of my eye to make sure he isn’t drooling.

I guess this movie-narcolepsy thing dates back to D’s childhood. His family first realized he had a problem when they threw him a birthday sleepover complete with all of his buddies. Apparently, the big draw was that Raiders Of The Lost Ark had just been released on VCR. All of D’s friends were talking it up all week long; and when the time came, they all gathered around his dad’s enormous screen to watch the cool movie. Well, they all watched it except for D. He fell asleep within the first ten minutes and missed his birthday party. What a freak show.

Let’s add to the issue. Keep in mind where I live. Southern California! Hello, entertainment industry. Movies, new television pilots and celebrity gossip are considered the créme de la créme of small talk and dinner conversations. Personally, I like to be “in the know”, and that just doesn’t happen when you’re in a dire movie-depletion situation. Thank God Pink Is The New Blog keeps me up-to-date on everything else.

So, last week I received a mailer from Netflix. I was sold immediately. Movies delivered to my doorstep? Sign me up. We have never owned a Blockbuster card! Can you believe that? D would rather fight to the death with a grizzly than drive to a Blockbuster to rent a movie. Are you sensing how pathetic this is?

Last night I watched Million Dollar Baby wrapped up in a blanket on my couch with a huge smile on my face. Not because it was such a happy-go-lucky movie…DAMN, that shit was depressing. No, I smiled because I knew I would ship it back tomorrow and receive Ray next. Woohoo!

Here is my Netflix Movie Queue. Obviously, I’m going for the blockbusters first, but any recommendations for other films from the past four years (I actually watched lots of movies prior to meeting the freakshow) would be greatly appreciated.

Some of my all-time favorite movies (you know, a vantage point for recommendations):