On Sunday, D and I kissed the kids goodbye and drove to LA first thing in the morning. Like always, I was a little apprehensive about leaving the kiddos, especially considering this was my first true night away from Wita, but my excitement for the day was keeping me from dwelling on that too much. 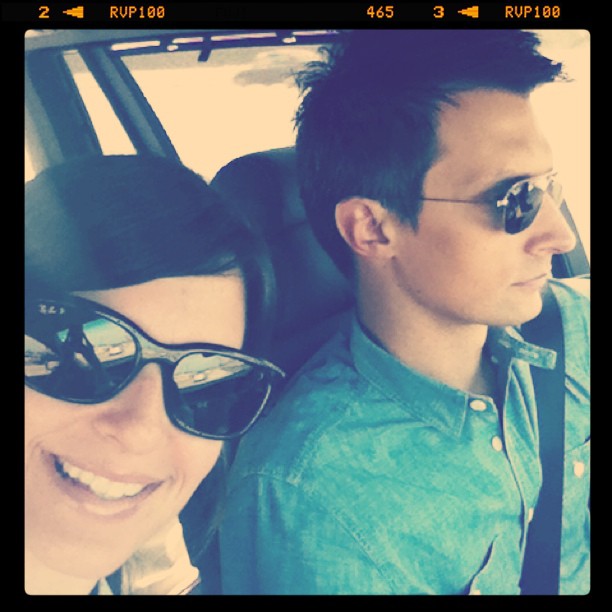 The lovely ladies from WCG had set up a full day for me, starting with hair and makeup at 10am. Within 3 minutes of showing up at the suite, I had a mimosa in hand. Very nice start, yes? 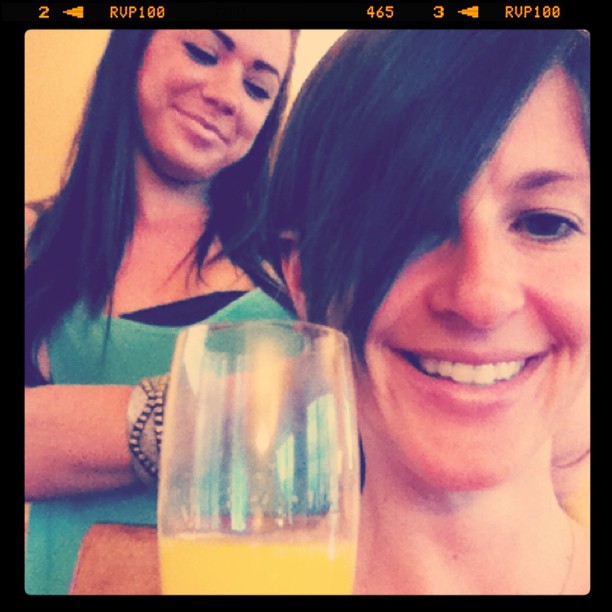 I had this photo of Camilla Belle as the hair inspiration, and 1,468 bobby pins later, I was thrilled with the result. 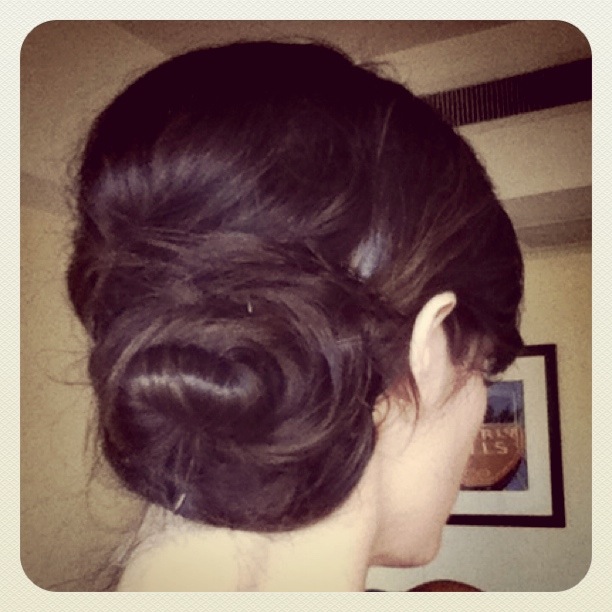 Hair complete. Next, makeup! Now, I’ve had some not-so-great experiences at the hands of professional makeup artists, usually stemming from my inability to speak up and/or say no. Coach D had psyched me up for my makeup moment during the drive that morning- “Be firm!,” “Don’t be afraid to tell them what you really want!” (Gotta love D, right?) So when I finally sat in that chair, I WAS READY, DAMMIT. I guess I made my wishes clear because I was super happy with the look that the makeup artist gave me. 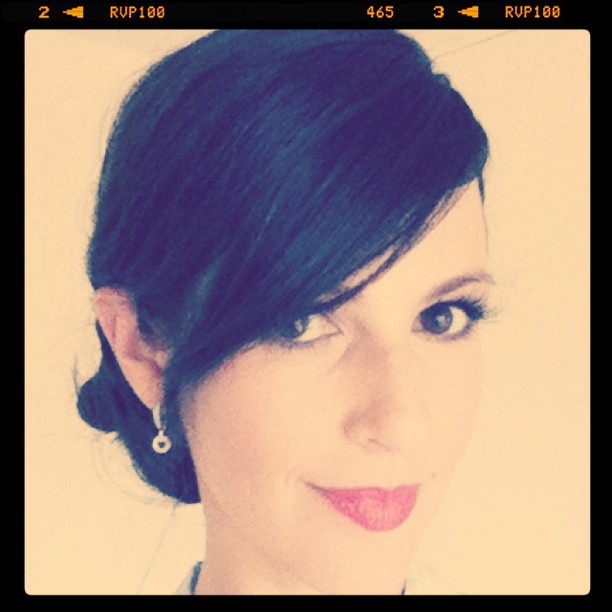 That gorgeous, sheer strawberry lipstick is Nars Flamenco. I found it after trying 80 billion reds at Sephora the day before, and forced the makeup artist at gunpoint to base my look around it. (Hey! I WAS BEING FIRM, SEE?)

After makeup, I grabbed a quick bite to eat around noon, and then spent the next couple of hours filming some short videos regarding rosacea. (One of the videos was a one-on-one with Dr. Deborah Luftman, who is a dermatologist, rosacea expert and all-around lovely lady. In fact, I printed out your questions about rosacea and had her address quite a few of them. Video coming soon!)

I had an hour of downtime after filming (which, of course, involved some fantasy football score-checking), and then it was time to head to the Emmys! 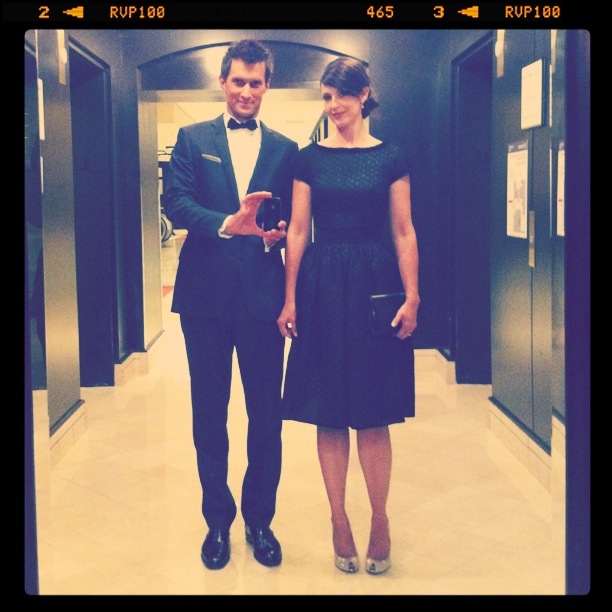 With my dapper date. (Eat your heart out, Don Draper!)

We made our way to the limo and hopped in. 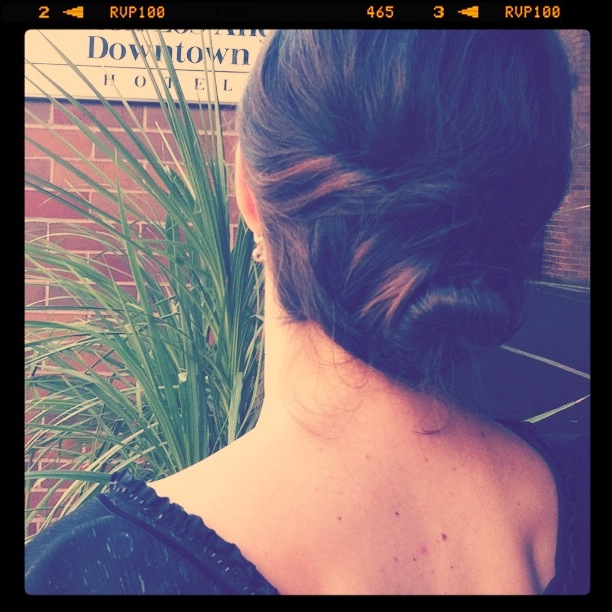 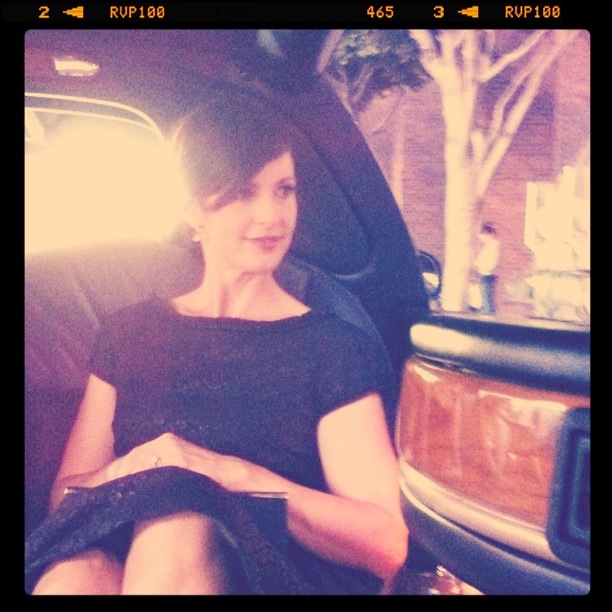 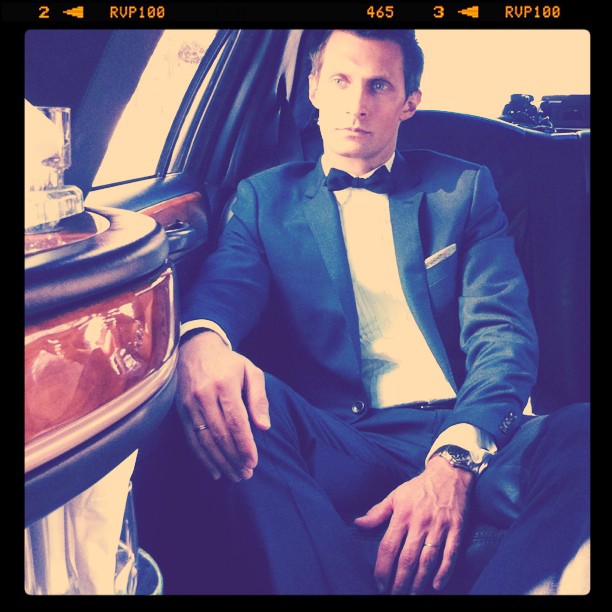 While in the limo, I relinquished all control of my iPhone to D. (Cameras aren’t allowed in the ceremony, so we didn’t want to lug the big one with us.) I knew exactly what would have happened had I kept the iPhone with me. Uh, nothing. It would have stayed put in my purse the entire night while I tried to catch glimpses of my favorite celebrities. D is much better about taking photos, thank goodness. 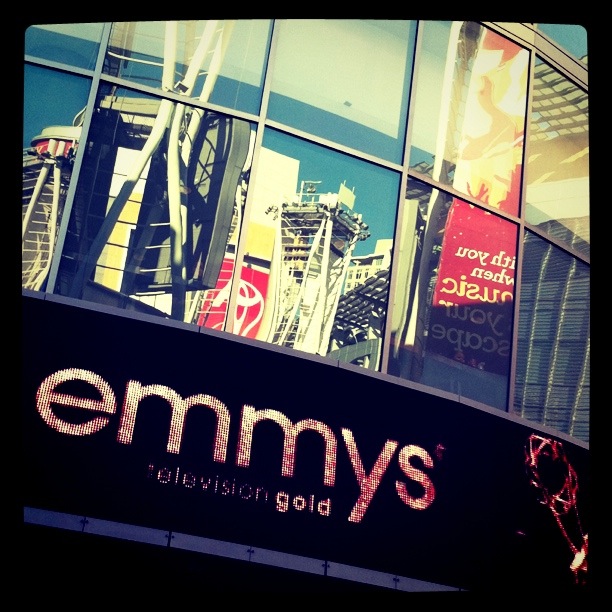 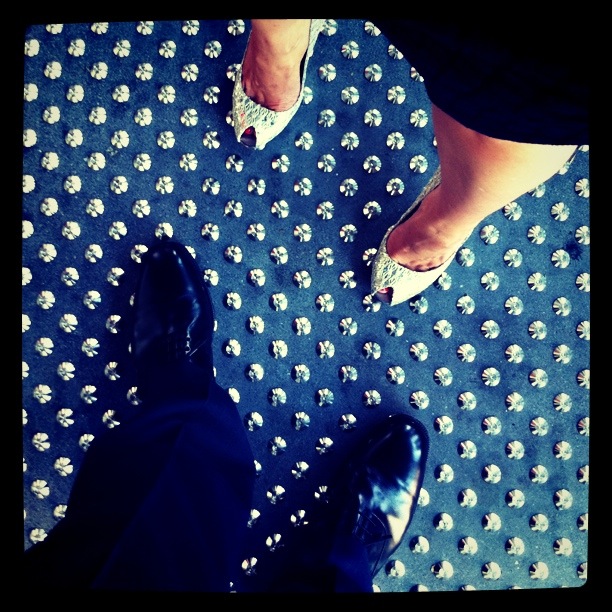 As we approached the Nokia theater and red carpet, the entrance was packed and not moving too quickly. We noticed that all the “guests” and “talent” entered through the same small entry with metal detectors, and quickly realized that we could be potentially rubbing elbows with some of our favorite celebrities.

I was on the lookout. 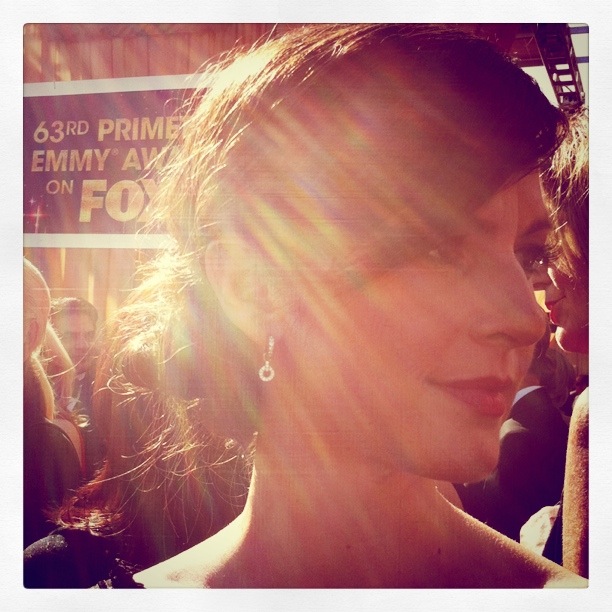 Within the first 5 minutes of standing outside the entry, I heard someone say “excuse me.” 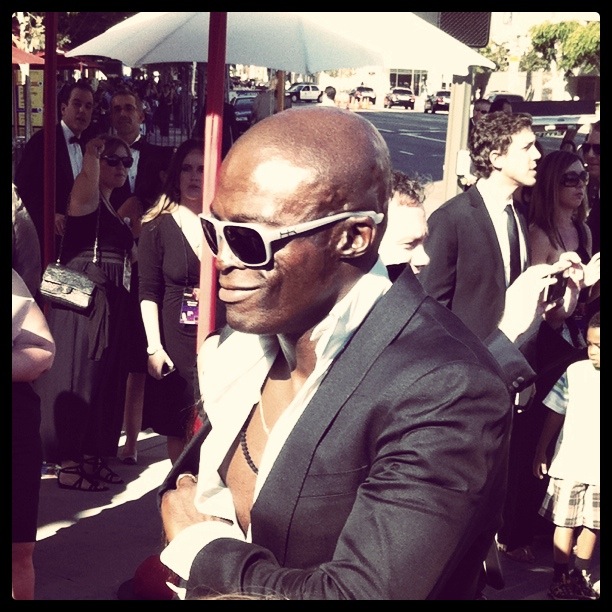 SEAL. RIGHT BEHIND ME. My heart started to beat a little faster. Holy crap, KISS FROM A ROSE, DUDE. Wait, this meant that Heidi had to be close by.

Yep, there she was. Gorgeous and tall and smiling and did I mention gorgeous? (She’s one of D’s faves, so he was obviously stoked.) We passed through the entry and it was red carpet time. I must admit, they really manage to make the red carpet look less chaotic on television than it really is. Truth is, it is crazy packed with guests, cameras, celebrities, photographers…everyone is craning to see their favorite while also taking in the sheer surreality of it all.

As we started to walk the carpet, D grabbed my hand, and said, “there she is.” I knew without hesitation he meant Gwyneth. I had mentioned that she was the one actress I wanted to see, and there she was, within a few feet of me. 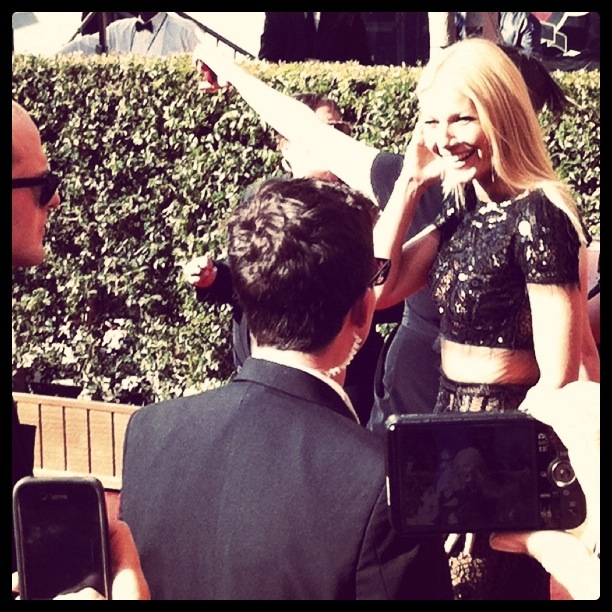 She is a striking woman. So effervescent and lovely. From that point on, it was celebrity onslaught. Rob Lowe! 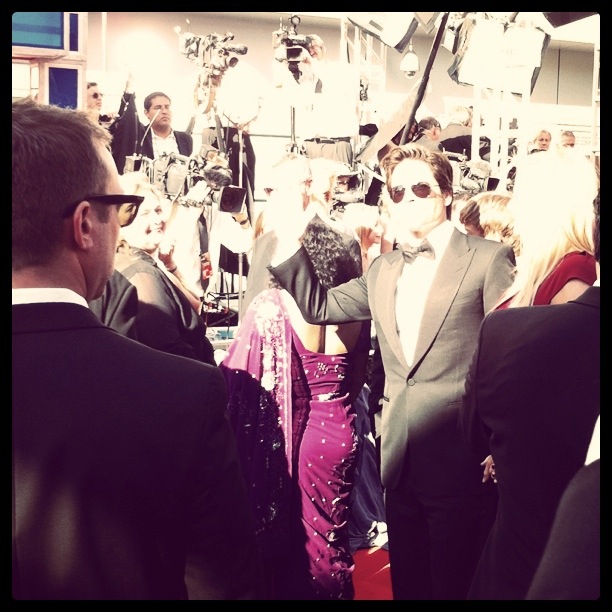 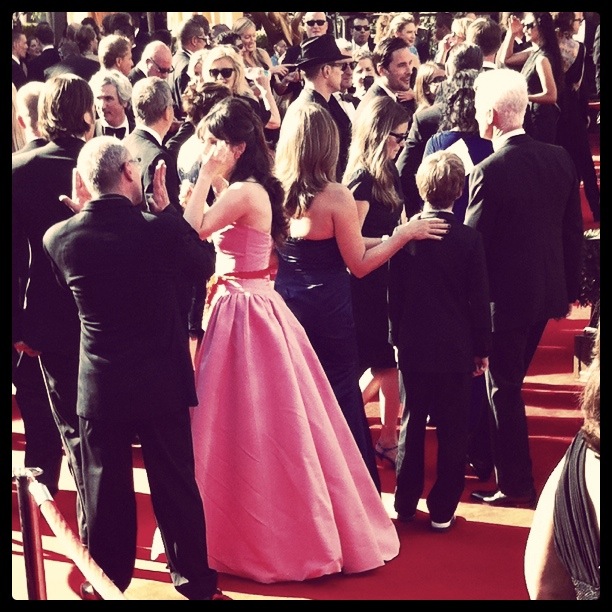 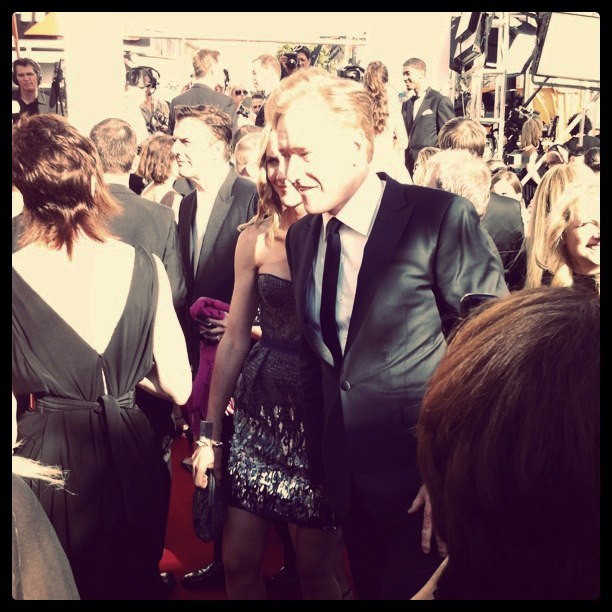 D kept his cool composure intact, but I might have been a little flushed. 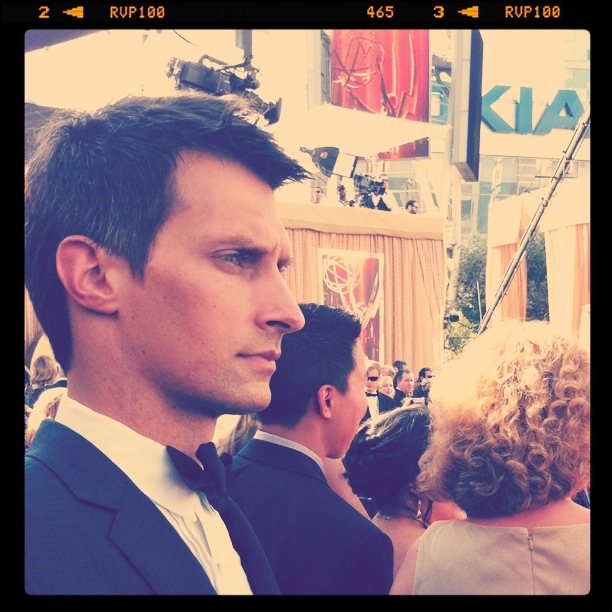 Once in the theater, we found our seats. First row of the mezzanine, which was perfect for watching the show and the crowd. 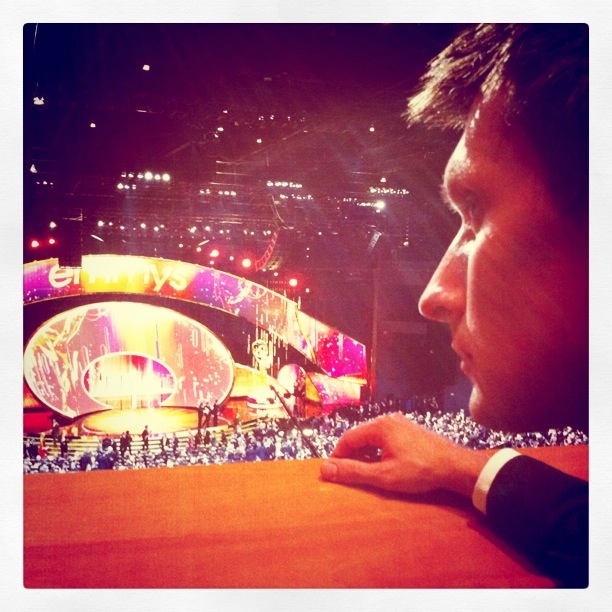 I, of course, immediately honed in on the Mad Men cast. (It’s not too difficult locating Christina Hendrick’s fiery red hair and that silver fox, John Slattery.) At that point, my camera battery was running low, so I turned it off during the ceremony. The ceremony itself was so cool – it was amazing to watch how a live awards show operates, and to see the funny little things that happened while the cameras were off. (Like when Jimmy Fallon started dry humping Jimmy Kimmel on the dark stage after their faux fight. I have a 13-year-old boy’s sense of humor, what can I say…)

I nearly jumped out of my seat when Kyle Chandler won for Friday Night Lights (that show was definitely the crowd favorite, at least in terms of applause and hollering), but am sad to say that my beloved Tim Riggins was not there. (Or at least I didn’t see him.)

The thing that was so surprising to me was how all of the guests would stand up and mingle during the commercial breaks, and when the stage manager would announce, “30 seconds until we’re live! Please take your seats! 20 seconds! 10 seconds!”, they still wouldn’t sit down. The lights would go up, Jane Lynch would start talking, and there would be tons of people still making their way to their seats. The nerve! (I know…I’m a tad neurotic, but THE RULE-BREAKING OFFENDS MY DELICATE SENSIBILITIES.) Also, many of the celebrities would hang out in the common areas during the show, so it was just more opportunity to ogle during bathroom breaks and the like.

I never felt antsy or bored during the entire ceremony. Those three hours flew by, which I wasn’t so sure would be the case. The show ended with tons of confetti and applause. 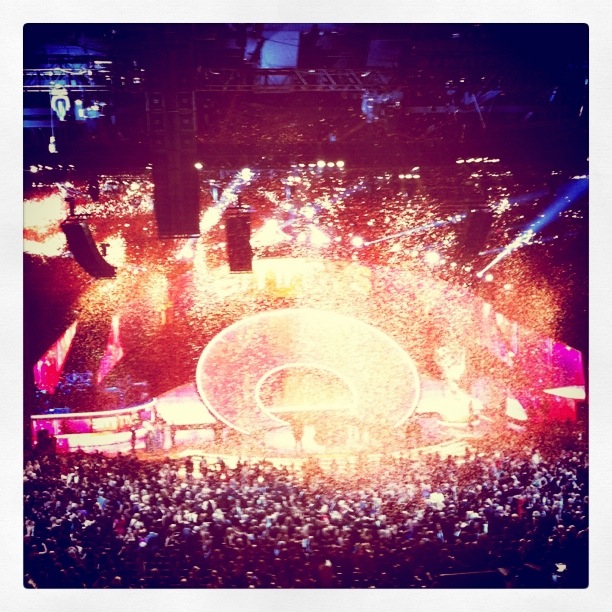 We meandered out of the theater, and I still laugh when thinking about this. You guys, when D and I walked out of the building, the fans lining the walkway were snapping our photos. HAHAAAAAAAAA. Obviously these people were highly confused individuals. I can just see them looking through their photos at the end of the night and asking themselves, “who in the hell are these people??” Exactly. NOTHING TO LOOK AT OVER HERE. (But thank you so much for the temporary ego boost!)

At that point, the limo pulled up and the gals we were with mentioned bottles of champagne in the limo and reservations at the Roosevelt. The night was young!

And this is when I made a decision that many of you will think was mega lame. After a nonstop 12 hours of excitement, I looked at D and said, “I just want a steak, man.”

We broke away from the group, I replaced my sparkly heels with Gap flats, and strolled to Morton’s Steakhouse. 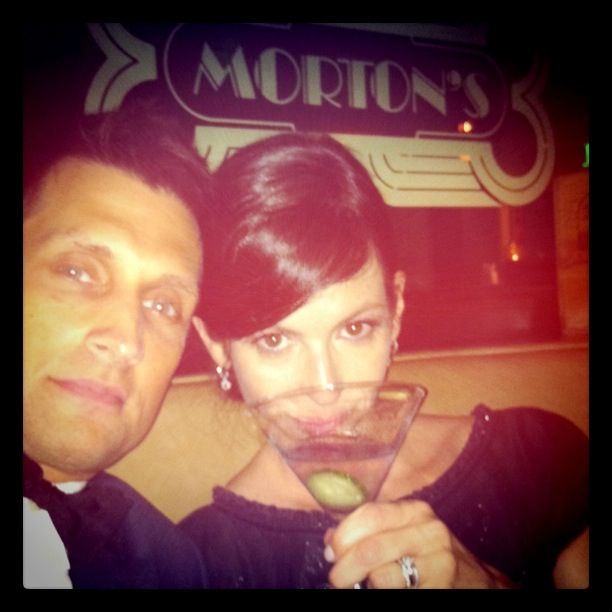 And that’s where I had my perfect Hollywood ending – a huge martini, a juicy steak, and my handsome leading man.

Thank you so much to Galderma for hosting this lovely evening. It will be a night I fondly remember for the rest of my life.

Also, the two winners of the Cetaphil prize packs are Melanie and Becki.