Yesterday was my greatest Mother’s Day yet.

(Is it wrong that I can’t make a statement like that without conjuring up a mental image of Chris Harrison? Stay tuned for Whoorl’s Greatest, Most Romantic Mother’s Day Yet! Don’t go anywhere! You do not want to miss The Most Dramatic Holiday Of The Year!)

(Is it even worse that I am STILL watching The Bachelor? Who’s it going to be? Shayne? The other chick? WHO?)

Now, technically (if pregnancy counts), I’ve only had two of these holidays under my belt, so I don’t have a lot to go by. BUT, c’mon people. Wito walked into the kitchen holding a homemade card, actually handed it to me and exclaimed, “Happy Birthday, Mommy!” (A+ for effort.)

You have to admit, CUTE. Precious, even! The Most Precious Mother’s Day Yet!

What an incredibly crazy week. As I mentioned, Nightline was at my home most of the afternoon on Monday, which was nerve-wracking and surreal in itself. Add in a toddler with a 103 degree fever and no babysitter, and watch Whoorl spontaneously combust!

When working out the details, I planned to film the segment over Wito’s naptime, with Brenda and Bug on call just in case he woke up. Obviously, as Monday morning approached, that plan went to the dogs, since I didn’t want to expose Bug to Wito’s mystery high fever from hell with no symptoms except half-mast eyelids and noodle limbs. So, I figured I would just have to make it work and pray he didn’t wake up. (These are the times when I am SO NOT COOL with the fact that I live thousands of miles away from my family.)

The producers were amazing, patient and so accommodating. Even mid-sentence during the interview, when high-pitched wails from the back of the house suddenly permeated the entire area. Um, about that nap. The producers kindly stopped filming, I ran to the back, tried my best to sooth, ran back to the living room, adjusted my hair and lip gloss (NARS Foul Play, if you must know. The Most Perfect Nude Gloss Yet!) and tried remember what in the hell I was blathering about. Lather, rinse, repeat.

After ten minutes of back and forth, I accepted defeat, called D from the back room, forcibly mumbling, “For the love of sweet jebus get your ass home I can’t do this on my own ABC is in my living room holy hell I’m going to die right here and OMG HELP WITO IS DELUSIONAL.” Luckily, he was home within ten minutes, and all was well. (I will let you all know the airdate as soon as I find out.)

So, this has been an increasingly long-winded way of telling you that Wito has been a sick kid all week with Roseola.

What is Roseola? Well, it’s a virus that causes a high fever for four days with absolutely no symptoms (besides the feverish hell), until the fifth day when an awesome red rash breaks out all over your child’s body. (Oh, and no matter what your doctor says, it DOES ITCH.) The good news is that once you get it, you’ll never deal with it again. The bad news is that your little one looks like this: 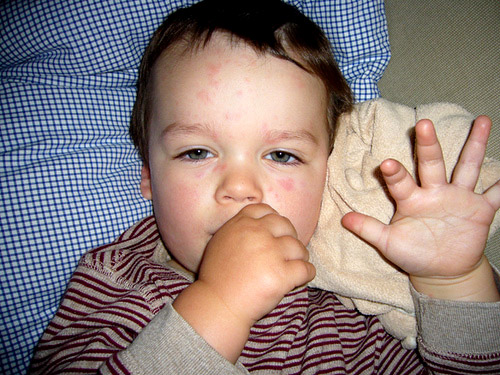 However, as Mother’s Day weekend commenced, the clouds parted, the angels sang, the rash disappeared, and Voilá! Happy, healthy boy! 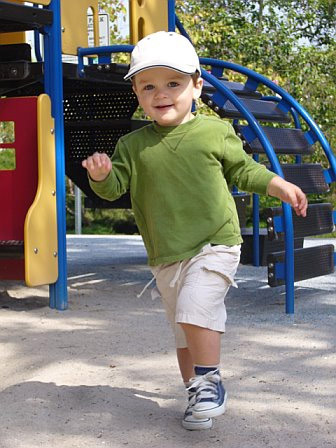 Oh! How could I forget The Most Romantic Mother’s Day Gift Yet? Now, D and I normally don’t spend much on gifts, but he surprised me with the PERFECT necklace.

The Most Beautiful Necklace Yet!

I finished the day with a couple Sierra Nevada Pale Ales, Kung Pao chicken and oatmeal chocolate chip cookies. All in all, a great day.

How was your Mother’s Day? Good food? Great gifts? Do tell!